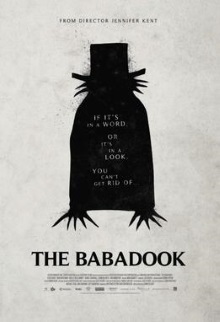 I was vaguely aware of this film when it played in the cinemas but it only really got my attention when lots of people on Broken Forum started talking about it. In particular, more than a few people chimed in to say how it’s a genuinely scary film that doesn’t rely on cheap jump scares. It was also very well received by critics, with a crazy high Rotten Tomatoes rating and comparisons with The Exorcist.

Even right from the opening shot of a close-up of a woman’s face that ends with her falling in slow motion onto a bed you can see why this comparison was made and why this film is a cut above the usual fare. The woman is Amelia who has to raise her young son Samuel by herself as her husband died while driving her to the hospital to give birth. The pressures of single-parenthood, combined with Samuel’s hyperactivity and anxiety over monsters, push Amelia close to a nervous breakdown. Naturally the audience knows that in a horror movie, the monster is always real but Amelia only starts to worry when a mysterious children’s book shows up in her house and just doesn’t want to go away.

The whole setup works wonderfully and the book itself must be one of the best movie props ever. It’s a large, hardcover pop-up book with creepy rhymes that successfully transform a nonsense word into a terrifying name. The minimalist design of the monster is pretty great as well, allowing its mere silhouette to suggest its presence and thereby induce dread. But the real genius of this film lies in its insinuations that although the Babadook is an external force, it has power only because some part of Amelia really is ready to just snap and kill her son out of frustration and grief due to the death of her husband that she has never fully come to terms with.

Unfortunately while the idea of using a literal monster as a metaphor for how hate can coexist with parental love is indeed brilliant, I find myself admiring this film more in the abstract than in reality. Many of its scenes are individually quite good but this is a case of the whole being lesser than its parts. In particular, it pulls the usual trick of the boy, who behaved erratically and seemed to lack any discipline in the earlier parts of the film, being the sane one when the threat of the supernatural becomes all too real. It doesn’t help that the scenes of him setting off all of his traps feels too reminiscent of the Home Alone movies with all of the comedic connotations that association brings. I also didn’t like how the film won’t fully commit to making the Babadook a being that only acts through the person it possesses. Seeing an invisible being throwing Samuel around isn’t scary because we’ve seen stuff like this so often already.

Noah Wiseman deserves praise for playing the boy. You’re convinced that he’s a total nightmare to be around yet he’s no less deserving of sympathy for it. Essie Davis is also great at being a mother who really, really just needs one good night’s sleep. And I suppose that director Jennifer Kent for thinking up this idea. Still, it doesn’t seem as if she has the experience to pull it off and so I found The Babadook to be a merely decent movie rather than a good one. After it ended, I found myself thinking, “Wait, didn’t The Shining do all that and do it so much better?”

The unexamined life is a life not worth living